How does an avid traveler, restless for new explorations, find solace in a pandemic world?

When I called her about this piece, Christina Francis was just getting out the last few bags of frozen sundried tomatoes she had brought from the Amalfi Coast in Italy four years ago, wondering how she could extend its ‘shelf life’. Just a few days before that, she tells me, she had recreated the thick and creamy hot chocolate she remembers from her travels in Italy.For the past few days, she then adds, she’s also been growing Italian basil in a dozen flower pots. “Because I was missing Italy so much,” she tells me with a guilty chuckle. 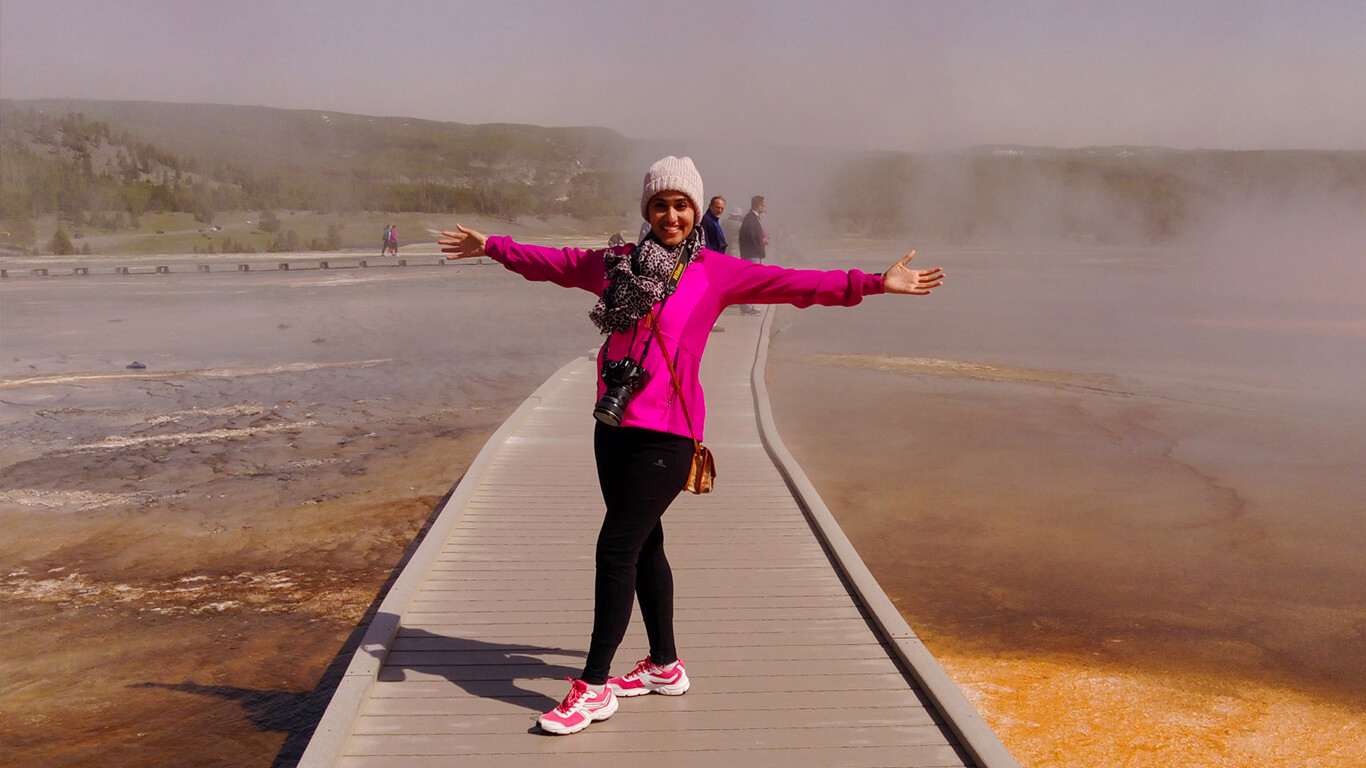 Christina, editor of one of the flagship properties of the Times of India Group in Hyderabad, Telangana, India, is what one could classify as an avid traveler. She began travelling in 2006, when she was still 19 years old although her first few expeditions were around work (she was already working at 18 years and training a 32-year-old yours truly in the art of writing features for newspapers). She has since travelled to 50 countries, travelling to a new place almost every month since 2014 and visiting a foreign locale at least twice in a year, exploring places, food, and culture and bringing back stories (and food and recipes), all before her 35th birthday. Clearly, 2020, with the pandemic and the subsequent lockdown and travel restrictions, has played truant. So also my call about how she’s keeping the explorer in her satiated. She just flashes her beautiful smile and tells me that she’s actually been thankful for the time she’s got, working from home, spending time with her husband at home and parents who live close by.

“But when I begin missing my travels, I start looking through pictures I’ve clicked on my journeys, getting in touch with friends I’ve made on these travels, or simply recreating the dishes I’ve eaten in those places,” Christina tells me.

Christina’s wonder for new places started with the stories her dad, CV Francis, brought back from each of his travels abroad. Francis had his own business based out of the UAE, spending half the year working there, with vacation months spent visiting his family at their Hyderabad home and then heading to his hometown in Kerala to meet his parents and other relations. Their bedtime ritual consisted of him telling Christina and her brother (who passed away a few years ago) tales of the toy stores and supermarkets he’d been to, of ice cream tubs filled by the gallons, and of people of various ethnicities he’d worked with or met. He’d even imitate their accents and mannerisms accurately, filling the kids’ little minds with wonder. “I’d fallen in love with all kinds of people—Filipinos, Lebanese, Turks, Pakistanis, Bangladeshis and Arabs—and knew of their traits, food habits, and accents long before I met them in real life. And I couldn’t wait to grow up and meet them personally,” recollects Christina.

And meet them she did, when she first traveled abroad for a junket to Singapore. Suddenly,she was reliving those bedtime stories Christina.

“And I was so grateful that my dad’s stories were true to life, with no bias in them. It made me much more open to differences in cultures long before I even travelled,” says a nostalgic Christina.

Showing the world to her parents

In addition to her dad’s perspectives, Christina was making her own discoveries—some about herself, some about the world around her. In Singapore, she found food she could customize to her vegetarian preferences, even on the streets. In the UK, she discovered how the delicate flavors of mascarpone and Italian custard balanced out the sharp contrasts of espresso and cocoa powder in Tiramisu. In Sri Lanka, she discovered decadent Asian luxury. Christina discovered she could fend for herself in the world.

After that experience, Christina wanted her dad and mum to experience the world as she did. “Though my dad worked in the UAE and my mum visited him there, my parents grew up around tough circumstances.They never think easily of spending their hard-earned money,” Christina says.

So in the late 2009, she planned a family trip, booking all of them on a Holy-Land Tour (entailing a journey around the historic, cultural, and religious sites around Egypt, Palestine, Israel, and Jordan). “I reckoned they wouldn’t feel guilty about this trip as it was spiritual too,” adds Christina, chuckling at the memory of her ‘shrewdness’.

The Holy-Land Tour was the first time Christina visited the Middle East and would turn out to be a spiritual one not only for Christina’s parents but also for her.

At Gaza Strip, she watched war-ravaged areas, feeling a sense of unreal absurdity about it all. “While speaking with people on both sides, I began understanding that I couldn’t take ‘sides’ about who was right and who was wrong because those distinctions suddenly vanished in my mind,” recollects Christina, adding how the trip taught her an invaluable life lesson. “It’s when I realized that all I was needed was to focus on at a given moment was to understand what about that moment serves me and humanity.”
The tour was also a little before the Arab Spring Uprising took place in the Middle East and North African regions—the mood in those places already tense. “The youth especially were raging. They wanted change. It was evident,” she recollects.

In Cairo, Egypt, a localasked her where she is from. “When I replied India, they just said, ‘You are so lucky; you live in a democracy,’” she says. “That statement hit me hard because I remember back then I was deeply disillusioned about the state of affairs in India, the politics and hopelessness about prevalent issues, but what he said reminded me thatI still had my liberty intact.”

The Holy-Land Tour was the genesis of Christina as the traveler she’s today,exposing her to the cultural instead of the curated and luxury aspects of travelling. “That’s when I understood what kind of travels moved my spirit. Most importantly, the Holy-Land Tour was what made me—a history graduate—realize how much I actually love history and wanted to relearn it through my travels,” says Christina.

Even so and despite a good grip on her finances, Christina knew every foreign travel would cost her some and needed to figure a way around those expenses. But where there is a will there is a way, right?

“In 2008, I’d visited a friend in Melbourne, Australia. While staying with her, I explored the state of Victoria,” she says. “I realized if I stayed with friends, I could cut back on the lodging expenses.”

So when friends living abroad invited her to stay with them, she happily took them up on their offer. “Soon, I was telling friends not to extend such invitations to me unless they meant it because I realized I am that person who’d shamelessly take on such an offer so I can get a free stay while traveling around that place,” Christina adds, giggling.

She also joined couch-surfing groups around the world, created essentially to address travelers’ issues of safety, costs, and experiences. Christina made more friendsthrough her travels, who invited her to stay with them if she considered traveling to where they lived. “Through my travels, I’ve benefitted from the immense good of the people. I’ve taken precautions and remained careful too, but I am always optimistic and know people are innately good and helpful,” she adds.

After Australia in 2008, Christina did Thailand. In 2010, she did a 50-day backpack trip across 5 countries in Europe—across Germany, Spain, France, Italy, and Switzerland, during which they lived in villagers’ homes, teaching their kids English, etc. (all at a princely sum of Rs 200,000 [~10000 AED]). Then in 2012, she headed to Kenya, staying in Maasai Mara for about two weeks. Another year, she fell in love with the heart-breaking beauty of Cambodia.

She did many trips with girlfriends, too. “There’s nothing like traveling with girls. Spa, endless chats, dressing up for cocktail hours and sky bars, and endless pics. I think girlfriend getaways are very special;one discovers how same, different, unique we all are. And it’s beautiful,” says Christina.

While Christina tried never to repeat a country, she soon she found something new about that ‘repeated’ land. “Even so, I’d try to squeeze in a small country into my plans for that year,” she adds with a little laugh. So while she gave her husband a birthday gift of a trip to Thailand, a country she had already been to, she ‘squeezed’ in Laos for herself during that trip.
But one country Christina wouldn’t mind repeating is Italy. “I love Italians. They’re so alive and warm and expressive. And I love how they speak.” Christina recounts how during one of her trips, she’d noticed a vendor woman swearing loudly at a man who’d left her store without buying anything despite wasting time looking around knickknacks. “I understood nothing she said, but I had to sit down and listen to her swearing because even that was so melodious,” adds Christina, her laughter ringing in.
Even Italian food comes a quick second to her favoritehome-cooked Indian fare. “I love Italian food, especially the pasta in Naples and Florence, though I don’t know how I can eat it next because I’ve become gluten-intolerant now,” says Christina who turned vegan recently.

Then 2020 dawned, and the fun and games took a back seat. The pandemic ensured Christina made no plans. “This lockdown is surreal for me. My parents are old and I don’t want to put them at risk, so I am not travelling even close by,” she says. “But I am also grateful for the time I’ve got at home because I know even this wouldn’t last forever and I am making the most of the ‘slow’ life that’s come my way.”

And how does she see travel now, with the pandemic, economic slowdown, and lockdown restrictions taking a while to reverse?
“It surely seems like the end of travel as we know it. COVID-19 has reminded us of our mortality… that everything is ephemeral. Also, with so many people losing their jobs, many will get back to travelling only slowly,less to splurge and more for the love of it. So we might even see responsible travelling. Traveling in planes may not happen soon, but we’d drive around to discover places around us. I think those are the new things that will happen now,” she says as we end our conversation.